SINCE cake-making unexpectedly entered my culinary lexicon with the horrifying realisation I couldn’t just go out and buy one, I’ve relied happily on Dr Oetker for icing. The supermarket own brand fondants all seem to be ‘may contain nuts’ so it was a blessed relief to have a ready-to-roll  I could easily track down in most stores.

Until now. If you’ve come across Dr Oetker Regal-Ice lately you will no doubt have noticed ‘may contain nuts’ has arrived there, too. All of a sudden I’ve realised we have another birthday on the horizon and I need to find out exactly what the risk is – and possibly hunt me down a safe alternative elsewhere. END_OF_DOCUMENT_TOKEN_TO_BE_REPLACED 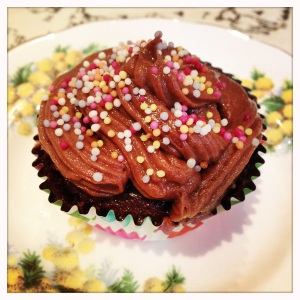 I CANNOT even begin to say how easy and amazing this allergy safe cake recipe is.

As usual, I left it until the last minute to get prepping for Sid’s birthday (how clearly I remember last year pledging to perfect all manner of sweet treats by the time he turned three. Ha!) and in a state of panic tweeted my worries about finding the right recipe.

Back came a link to something called ‘Wacky Cake’, an American concoction apparently created during the Depression era when fresh ingredients were rationed. It contains no egg, no dairy, no nuts and can be baked with gluten free flour, too. It uses vinegar or lemon to replace the egg and it works.

END_OF_DOCUMENT_TOKEN_TO_BE_REPLACED

I RECENTLY posted about our fab stay at Higher Lank Farm, where the lovely Lucy became the first person outside our immediate family to cook for Sidney. Among the treats were her fruity fairy cakes – little sponge revelations where spoonfuls of stewed apple or apricot replaced egg.

I wish I’d had this recipe months ago. It’s so easy – barely more than half an hour from start to finish – and even the non-allergics love them.

When Lucy appeared with a pile of mini apple ones during our welcome ‘high tea’, Sidney wolfed down five. They keep brilliantly in the freezer, defrosting in just half an hour if you need them in a hurry. They’re delicious plain, or iced with a glacé cherry topping, or decorated with a thick layer of lemon buttercream and sprinkles.

Even better, Sid was able to help Mum make a batch of them last week and immensely proud of his efforts he was, too: it’s heart-warming to see him baking. I so want him to take delight in food and not (always) view it with fear.

The only tweak I’ve made here is to omit Lucy’s inclusion of xantham gum. For some reason my early efforts resulted in horribly chewing gum-textured cakes (whereas hers were fluffy and light) and there seems to be no downside to leaving it out. In any case, xantham is already in the Dove’s Farm flour blend.

2 heaped tablespooons of either stewed apple or stewed apricot

The juice of one lemon if using the apricot recipe

Peel and chop the fruit and stew without water, constantly stirring, until softened to a pulp. Mash well.

Cream the butter and sugar together in a large mixing bowl until smooth. Ideally, use a food processor to really whizz it up – not enough mixing can lead to a ‘granular’ sugary texture.

Add in the sieved flour and baking powder, and two heaped tablespoons of the fruit. Add the lemon juice for the apricot cakes. A tiny touch of milk for the apple cakes can also help, but isn’t vital.

Whizz the lot in a food processor until smooth. Using an ice cream scoop or a dessert spoon plop the mixture into little fairy cake cases in a baking tray (these ingredients will get you around 12 cakes) and cook in a non fan oven on 180.

Bake until golden brown, which depending on your oven can take anything from 15 to 25 minutes. Don’t ask me why, but if I ever try to double this recipe and batch bake more the cakes sink – yet when I stick to the amounts here and bake 12 at a time, they come out perfectly. I read somewhere once that doubling up gluten free baking recipes isn’t straightforward so maybe there’s something in it.

For plain icing I mix Tate & Lyle or Whitworths superfine with water (most other brands contain an ‘egg trace’ warning) while I followed this lemon buttercream recipe to dress the apricot cakes and added Dr Oetker sugar strands, which are wheat, nut and egg free. 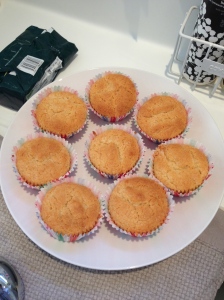 THIS Dove’s farm recipe is as quick and easy as it looks.The biscuits worked a treat on first attempt – a rare find, I find.

I’ve made them as recommended with lemon zest and juice, and again with a little less lemon, ditching the zest and throwing in a handful of chocolate drops. Next time I’m going to try substituting the lemon for orange. Then we’ll go for a coconut version, too, I think. Ooh, the possibilities… END_OF_DOCUMENT_TOKEN_TO_BE_REPLACED 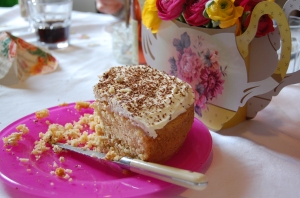 SUDDENLY Sidney’s second birthday was upon us and I realised that, nope, I hadn’t spent the entire past year transforming myself into the queen of allergy friendly baking after all. And I had no idea what cake I was going to make.

For his first we managed, after much effort, to create a decent Victoria-style sponge, but I didn’t want to churn out the same staple year after year. I needed a repertoire of treats. Plus we were now free to eat banana, Sid having outgrown that ridiculous allergy at 18 months… and banana can be a handy substitute for egg in cake recipes.

END_OF_DOCUMENT_TOKEN_TO_BE_REPLACED

YOU’LL BE hard pressed to find a shop or deli-bought cheesecake that doesn’t contain egg, let alone wheat or nuts. But it’s actually really simple to knock up an allergy-friendly alternative that tastes just as good… and maybe even better.

I first made this recipe, just before Sid was born, for my husband’s birthday. (I’m not a mental baker, but I was six months pregnant and we weren’t going out on the razzle so I decided a cake would be a substitute – albeit a poor one!). I’ve adapted it here for Sidney using Tru Free digestives, which are egg, nut, wheat and gluten free. END_OF_DOCUMENT_TOKEN_TO_BE_REPLACED

Obviously, Sid has never been able to sample any of these concoctions although, luckily, he’s too young to know any different. But as he nears two and is starting to notice (and care) what other people are eating, I’m delighted to say that Grandma’s traditional flapjacks have been reinvented to fit his silly dietary demands – wheat free, egg free and, as ever, resolutely nut free. END_OF_DOCUMENT_TOKEN_TO_BE_REPLACED

The first birthday loomed and I started to fret. We’d been trotting along quite happily with a nice rotation of allergy-free homemade meals. But cake? I couldn’t let his birthday go by without cake.

Already we’d been to a few parties and had to drag the poor kid away from sticking his hands in a medley of elaborate concoctions – a farm scene replete with marzipan cows; a giant, jolly yellow duck; cupcakes iced with perky animal faces.

While the other babies shovelled up the sponge and jam, our little one contented himself – quite happily, I have to say – with sticks of boiled courgette (I know, but I hadn’t anticipated the cake thing and it was all I had to hand…).

To be honest, we’d been banking on having lost the wheat allergy by his first birthday, as the doctor had said he was “95 per cent likely” not to be allergic but to avoid it as a precaution until he was closer to a year.

Two weeks before Sidney turned one we attempted a hospital-backed home ‘Weetabix challenge’, and a few days into it he broke out in hives from top to toe. Not a severe reaction, because he’d managed to stomach a couple of teaspoons before the rash broke out, but enough to mean wheat would remain a no-no for the foreseeable.

But, still, there had to be cake. And finding a recipe was easier said than done. There were plenty of wheat-free or egg-free ideas out there, but not necessarily wheat-free and egg-free. And the ones that did exist had one magic ingredient: banana.

In the end it was a mix and match job, cobbling together a couple of vaguely promising recipes and adapting them to suit – switching normal self-raising for wheat-free; ditching the ground almond. A succession of mini efforts were baked over about a week, with some dodgy outcomes. But the end result was this: 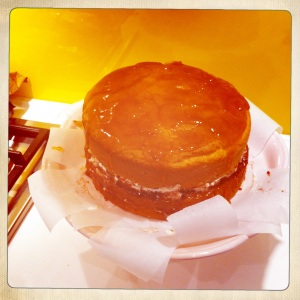 Looks OK, I reckon. The sponge is a little denser than a traditional version would be, but it actually tastes pretty good. I’d even go so far as to say you’d never know…

It’s become a stalwart for us now, for baby birthdays or family dos. It’s nice sandwiched with St Dalfour raspberry fruit spread or Dr Oetker apricot baking glaze and whipped cream or buttercream. Sometimes we top it with the apricot and leave it at that; for properly grand events we might even smother it in fresh cream and dot it with fat raspberries. Or just pour over some runny white icing and let it dribble and set…

Grease the tin with butter and swirl it around with a little wheat-free flour to coat.

Cream together the oil, sugar, yoghurt and vanilla essence (if using).

Sift the flour and baking powder over the mixture & beat with an electric whisk. Gradually add the milk and continue whisking for a good minute or more.

Turn the mixture into the prepared tin. Bake at 190 C (this may depend on your oven, but I find it better not to use a fan oven for this) for 25 minutes.

Check cake is done by inserting skewer. If it comes out wet, leave for another five minutes or so.

When baked, leave for five to ten minutes then turn out on to a rack and leave to cool completely. 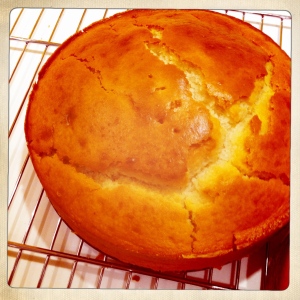 The cake freezes well for a good two or three months if wrapped in clingfilm and sealed inside a knotted plastic bag.

Place butter in a bowl and beat until soft. Gradually sift and beat in the icing sugar, then add milk or water to give a fluffy consistency.

Sift icing sugar into a bowl. Gradually add 15ml (1tbsp) warm water until the icing becomes thick enough to coat the back of a spoon. If necessary, add more water a drip at a time or icing sugar to adjust the consistency.