TOMORROW we are going into hospital for a ‘baked egg challenge’. This means that Sidney will be fed a pre-baked, egg-containing muffin in incremental doses to see if he reacts.

Other than attempting a taste challenge such as this, there are no other reliable tests to determine tolerance.

This is the first time I must confess to feeling properly nervous about a food challenge.

What do I know of Sidney’s egg allergy so far? Well, that he reacted at just five months old when somehow a trace amount of egg that my husband and I had been eating got on to his skin. Within minutes he was bright pink, covered from head to toe in hives and screaming his teeny head off.

I know that his latest skin prick test results were pretty big – maybe a 12mm wheal, if I remember rightly. Not little, anyway. And while SPTs (skin prick tests) cannot determine the severity of an allergy they can determine the likelihood of an allergy. So even though Sidney has never actually eaten any egg, ever (other than via breastfeeding), we can be pretty sure he is definitely allergic.

Baked egg, of course, is the unknown quantity.

Why else am I nervous?

We used to dub Sidney the 5 per cent kid because his doc had said that, despite a positive SPT to wheat at six months old, he was “95 per cent unlikely” to be allergic but that we should wait until he hit a year before trying it. He was allergic to wheat. Plus, he is one of the five per cent of peanut allergic kids with allergy to other legumes.

So I won’t be too surprised if he sits in that 20 per cent of kids who can’t tolerate baked egg, as unscientific as my theorising may be. It’s a question of ‘hope for the best, expect the worst’.

I’ve also been agitating about the best way of approaching this new challenge with Sidney himself.

We’ve conducted food challenges at home, but with food that he has had low to zero skin prick tests for and which his doctor felt were safe to try. There have been some nuts included in this (hazelnuts, walnuts and almonds) and I’ve got over the confusing aspect for him by not actually ever referring to them as nuts. So we have homemade ‘hazel’ butter now, for instance, because I would rather maintain the simplicity of ‘all nuts bad’ than give his poor little head too much to ponder on. He’s only three.

The last time we had a hospital challenge, to sesame, he was barely 18 months old and we could have daubed poo on his face for all he knew. Now, he understands that we are feeding him something to test whether he can safely eat it. So, I had a few issues…

Scenario 1: Tell him we are trying a muffin with egg in it

The possible outcomes are:

1. He is nervous and refuses, the mantra “no eggs” having been drilled into him since before he could walk

2. He fails the test and has a reaction. OK, he’ll then know exactly why eggs are bad, but will he trust us with any future food trials again?

Scenario 2: Don’t tell him this is an egg challenge, just say we are trying a “new cakey thing”

The possible outcomes are:

1. He reacts, and is then nervous about any future challenges we try

2. He passes the test, is none the wiser (for now) but we can introduce baked egg secretly and hope that this early tolerance develops into an outgrown allergy by the time he hits teendom

We’ve gone for scenario 2. As far as I’m concerned, at three he’s too young to have to grapple with the intricacies of his allergies. The simpler we can make it for him, the better, and the safer.

The muffins are sitting in our freezer in the basement, safely sealed in a box. I asked Mum to bake them for me to a specific recipe provided by the hospital (around four medium eggs shared between 12 muffins), because I didn’t want to be fannying around with eggs in the house. 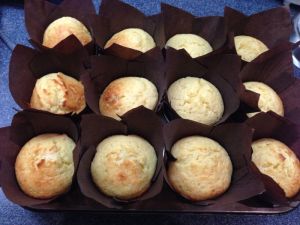 They look nice, huh? Who would think that something so innocuous could be so fraught with risk.

7 thoughts on “The challenges of an egg challenge…”